Right Driver
Home › Car › What are the different road stud colours and what do they mean?

What are the different road stud colours and what do they mean?

As you are driving you’ll see reflective road studs marking the road. These are also called reflective studs and cat’s eyes, because as you approach them they look like a pair of cat’s eyes on the road, and they originated here in the UK back in 1933. It was trademarked under the name ‘Catseye’.

The cat’s eye is what’s called a retroreflective safety device – it reflects light back to the source (i.e. your headlights). Originally they were only used down the centre of the road whereby one cat’s eye had four glass spheres set into a white rubber dome, two spheres facing each direction up the road. This dome is mounted in a cast iron housing, and deformation of the rubber as traffic passes over it allows it to sink into the housing where a fixed wiper cleans the glass spheres. In general the road studs are robust, however, a leading drum and bass DJ, Kemistry, was killed on April 25, 1999 when a van dislodged the metal casing of a road stud which flew up and went through the windscreen of the car she was a passenger in. It hit her in the face, killing her instantly.

Motorcyclists should be particularly careful of reflective studs as they don’t provide as much grip as tarmac and tend to be positioned on white lines which have less traction in wet weather.

Intelligent road studs have been invented such as a flashing blue stud that only activates at temperatures below 3 degrees Celcius – the temperature at which ice is likely to form. Other proposals for road studs include smart timing to allow drivers to judge their distance behind the vehicle in front. For example, as a vehicle passes the road stud it will change colour for a preset number of seconds before changing back again.

Check out your knowledge of reflective road studs in the motorway questions section of our site. You’ll find multiple choice questions to help you learn the rules. Rule 132 of the Highway Code states: 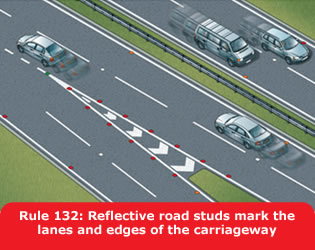 Reflective road studs may be used with white lines.

Other countries have different types of reflective road studs. For example, New Zealand has raised studs that don’t retract into the ground on motorways.

Road studs act as an audible and sensor notification that a driver is wandering out of the lane, and they can be used in conjunction with rumble strips which are corrugated lines that make a noise when drivers drive on them.