Right Driver
Home › Car › Why are the UK’s roads full of potholes?

Why are the UK’s roads full of potholes? 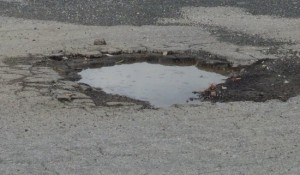 You may have noticed how many potholes there are on our roads at the moment. In fact, there are more potholes now than ever before – one for every mile of road according to new research.

There’s been a 79% increase in compensation claims for pothole damage to vehicles and just under 10% of motorists reported suffering some kind of damage in the last 12 months because of poor road surfaces. Deep potholes can cause punctures and bend of break wheels and suspension components. They are particularly dangerous for motorbikes.

What has caused all these potholes? Remember those floods? A metre of running water rushing over the road scours it with debris causing cracks and depressions. These are the start of a pothole as those cracks allow water to seep through to the sub-layers. If there was an existing pothole, floods will have washed away loose material around the edges, making it bigger. All that water also causes super-saturated soil beneath roads and, in areas of weakness, it will create a situation where the top layer of the road isn’t supported enough. The action of heavy vehicles rolling over it deforms the top layer, causing more degradation.

When winter comes along, water trapped in cracks in the top layer, and in the sub-layer of the road freezes as ice and this expansion cracks the surface further making it more likely it will develop into a pothole. The ice then thaws and refreezes over and over, weakening the road surface.

The action of traffic on existing potholes accelerates their growth as large vehicles break down the edges of the pothole, increasing its diameter. Potholes can be fixed with a patch of hot and cold asphalt.

Peter Box, Chairman of the Local Government Association’s Economy and Transport Board, explained that under-funding also contributes to the problem with 23% of councils only making temporary fixes to potholes rather than resurfacing the road in a more robust way.

If you want to know more about potholes than you ever thought you needed to, watch this 1983 video by the US Army Corps of Engineers.

Readers – have you damaged your vehicle by driving over a pothole?