Right Driver
Home › Advice › Do you need to carry a fire extinguisher in your car?

Do you need to carry a fire extinguisher in your car?

Car fire extinguishers usually come with a mounting bracket so that they don’t roll around in the car. This helps prevent them becoming damaged or being discharged accidentally. They should be carried in the boot because:

What sort of fire extinguisher do you need?

There are three classes of fire that affect vehicles (cars, vans, caravanettes, etc): 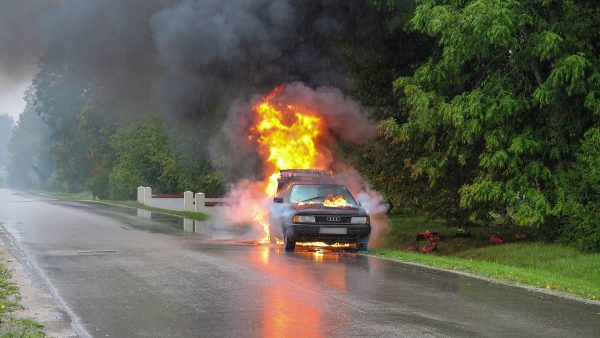 Car fire by the side of the road

Are you legally required to carry a fire extinguisher in your car?

An employer has to satisfy a number of legal requirements to keep its employees (drivers) safe. While company vehicles can be classed as a  ‘workplace’ there is no law that says a fire extinguisher is mandatory in a company car. However, if a risk assessment has been conducted and the driver’s regular duties give some exposure to the risk of fire, it is prudent to install one.

Larger trucks and vehicles that carry dangerous goods or chemicals will have separate regulations governing the type of fire extinguisher(s) that must be present.

If you have a car you use for racing (e.g. clubsport or rallying) then you will need a fire extinguisher.

How do you put out an engine fire?

An engine fire is the most likely type of fire you’ll experience in your car as you’ve got hot oil and electrical system. Petrol in the tank is less likely to catch fire unless it’s punctured in an accident or the fuel lines spslit as it’s sealed and there is no ready source of oxygen. There is a chance that a hot exhaust system could cause dry grass to ignite if you park on it. It’s the source of oxygen that is the problem: if you have (or suspect you have) an engine fire, don’t open the bonnet the whole way otherwise you’ll feed the fire with a load of oxygen, causing it to flare up. Simply switch off the engine, pop the bonnet, stick the nozzle of the extinguisher through the gap and spray it liberally.

The chances of an accidental fire are fairly low. There were 11,555 in the UK to the year ending September 2017.