If you grew up in a farming county like I did, you get used to driving on rural roads. It’s a huge difference from city or town driving, and here are the main reasons why.

Certainly in Lincolnshire, where I first learned to drive, the roads that followed the lines of the drains scored into the Fens were extremely uneven because of gradual subsidence of the road. The suspension on the old Austin Metro used to bottom out occasionally down Hobhole Bank.

Generally where there are areas with bumps and dips in the road you would see appropriate signage. However, most of the B roads in Lincolnshire are like this therefore locals just assume it will be a continuous battle. You should praise the engineering deities that cars don’t have bump steer any more (where loading up one side of the suspension would cause the car to swerve).

At certain times of the year it can seem like an endless procession of tractors, combine harvesters, pea viners and other wide, tediously slow agricultural machinery trundling along the roads. In Lincolnshire you have the benefit of flat land, straight roads and very little in the way of hedges, so overtaking tends to be easy (as long as the road is wide enough), but if you are in some where more hilly and picturesque like the Cotswolds or Wales, you may be stuck for a while until the driver can pull over safely and let you by. 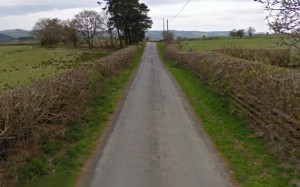 Narrow roads don’t just make it difficult to pass large farm machinery; they can also make it a tight squeeze with regular cars coming the other way. If you’re in a county with high hedgerows where you can’t see around corners, be particularly careful that you don’t meet something head on where there’s not enough room for both of you to get past. 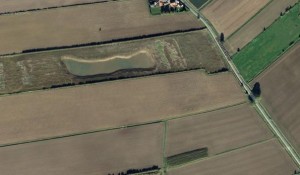 Of course, all that agricultural activity drags mud onto the road, as does moving livestock around. Mud is not too bad when it’s dry, but as soon as it gets wet it can be extremely slippery before it washes away. Mud will be more prevalent at certain times of the year, particularly when ploughing is happening. As you can see from this image, there are tens of thousands of acres of fields that get ploughed in some areas, and the tyres of agricultural machinery drags some of it onto the roads, mostly around the gates to the fields.

Livestock does escape occasionally and has zero road sense. Farmers will also move livestock between fields and therefore you may come across a flock of sheep blocking a lane.

Pheasants are shockers for sitting in the long grass on a verge and flying out towards your car just as you get close, and birds of prey can often be on the road cleaning up roadkill.

Lack of lighting and markings

Most rural roads have sparse street lighting, or none at all except at major junctions. Throw into the mix the occasional absence of road markings and cats’ eyes and you have to be vigilant so you don’t end up in a ditch.

The road edges are often poorly defined, and you will definitely come across narrow humpback bridges only wide enough for one car and often without markings on the parapets. 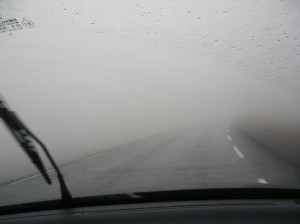 Fog can hang around and seem denser in rural areas. If there are no cats’ eyes on the road or street lights, it can be more difficult to tell where you are, especially when coming up to junctions. You can see in this photo how much of a wall of white it creates, obscuring what’s ahead. If you use your headlights on full beam, it makes it worse.

You might not know the roads, but the locals will and they’ll be used to driving them quickly. The best thing you can do if you’re on unfamiliar roads is to let them past. But don’t get sucked into following them at their speed; I once did that with a Porsche and completely forgot the Porsche was far more capable than my car and nearly ran off the road on a tight bend that was no trouble at all for the Porsche at 60mph, but was more like 40mph corner for me.

There are very few places in England where you are more than, say, 30 miles from some kind of services. This isn’t Australia or Canada – England is quite built up apart from some places in West Scotland, Wales and the middle of the Yorkshire Dales. This doesn’t mean, however, that they’ll be open all hours like you would expect in the city. Keep your petrol tank reasonably full if you’re planning the big journey to somewhere remote.

Rural roads often are not gritted, or they’re gritted much less frequently than A roads. Be careful on cold nights.

Experience rural driving from the comfort of your computer

If you haven’t driven in a rural area, search Google Maps for Hobhole (B1184), which I’ve driven down many times, and follow it from the junction of Station Road towards Midville using street view. You’ll see the concrete bridge at the junction. You’ll find it’s a narrow, unmarked but arrow-straight road with grass growing up to the edge. There are signs warning of bumps, hedges down the left side with a deep drain and fairly immovable telegraph poles to hit if you get it wrong on the right. Go far enough and you’ll see an old brick bridge on the left (just before the first road on the right), and numerous entrances to fields and farm buildings where large machinery can emerge from. At one point you’ll see a small black Peugeot coming the other direction which passes the Google Maps vehicle almost hugging the verge.

You can do the same for many roads in Wales, Scotland, and the West Country.

Rural dwellers: can you think of any other hazards on rural roads (apart from visiting city dwellers!)