Driving on roundabouts – the easy explanation for when to signal

There are only three scenarios you will encounter when driving around a roundabout: 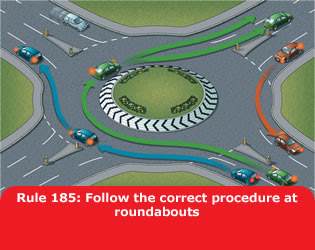 Where there are more than four exits off a roundabout, and in that case you should pay attention to the road markings as you approach it, then use the rules below.

When you exit a roundabout it must be preceded by you indicating left. That means that if you are turning left straight away then you will be indicating left as you approach and enter the roundabout (see the orange car), and for all other turns you will indicate left as you pass the exit before the one you want to take.

If you are going straight through (see the blue car), then drive in the lanes which are indicated by the road markings (there will be a straight arrow), and do not signal until you pass the exit before the one you want to take. Many drivers make a mistake here and indicate right even though they are going straight ahead. This is not correct. You only indicate right if you are actually turning right.

If you miss your exit, keep indicating right and go all the way around the roundabout.

If the roundabout has more than four exits, look at the road markings to determine which direction is straight through. For all exits you must indicate left before you take the exit. Bear in mind that if you indicate left and don’t take that exit that cars coming onto the roundabout just after that exit might think you are turning and could pull out in front of you.

Other roundabout rules and guidelines

Give priority to traffic approaching from your right, unless directed otherwise by signs, road markings or traffic lights.

Check whether road markings allow you to enter the roundabout without giving way. If so, proceed, but still look to the right before joining

Watch out for all other road users already on the roundabout; be aware they may not be signalling correctly or at all

On roundabouts controlled by traffic lights, try to anticipate the phases to reduce your need to use the brakes, but be aware you are not holding up other traffic.

On roundabouts with shoulders to allow heavy vehicles to get round, don’t use these shoulders unless you need to.

If you have to stop on a roundabout, for example if the exit is blocked, don’t block traffic from entering the roundabout.