Why skids are becoming less common 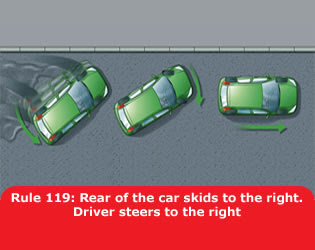 A skid is a loss of control of your vehicle. The forces acting on the wheels and tyres overcome the grip available from the road and they will either lock or travel laterally (sideways). Different road surfaces have difference coefficients of friction, so the speed at which this happens will be the greatest on a dry road and the least on ice. In all cases, though, there are ways to stop the skidding before it happens, and to regain control once it is happening.

In the Highway Code Rule 119 states

“Skidding is usually caused by the driver braking, accelerating or steering too harshly or driving too fast for the road conditions. If skidding occurs, remove the cause by releasing the brake pedal fully or easing off the accelerator. Turn the steering wheel in the direction of the skid. For example, if the rear of the vehicle skids to the right, steer immediately to the right to recover.”

Problems with this advice

Back in the old days, this advice was perfect, except for the fact that if you steer too far you’ll probably over correct and end up in a ‘tank-slapper’, or simply spin the other way. Older cross-ply tyres didn’t have as much grip and therefore the speeds at which skidding started were much lower and drivers had more time to contemplate their actions.

Nowadays our tyres have excellent grip and to exceed friction in the dry (with the exception of locking the wheels through braking) requires much higher speed; the type of speed that means you’re probably going to crash anyway. You should still turn into the skid, but be aware that things will happen very quickly.

Technology will save the day

Anti-lock brakes (ABS) are now fitted to every new car. These prevent the wheels from locking when applying the brakes. However, they don’t prevent the vehicle from skidding as turning sharply could still cause the vehicle to skid sideways. Modern cars also come with electronic brakeforce distribution (EBD) and brake assist (BA). EBD ensures that the maximum braking force is applied to each wheel in an emergency situation by activating ABS on each wheel individually. BA detects when you need full braking power in an emergency and gives it to you a fraction of a second quicker than you would normally be able to activate it.

ESC, which is also known as Vehicle Stability Control (VSC), Dynamic Stability Control (DSC), Electronic Stability Program (ESP) and other names is a suite of electronics that detects and reduces loss of traction. It has been mandatory on all new cars produced in Europe since 2011. It includes the ability to individually brake each wheel to regain control of the car in the event of a skid, i.e. an unwanted lateral loss of traction. It is extremely difficult to maintain a skid with ESC because, as long as you steer roughly in the direction that you want to go, ESC will bring the car around to that direction with virtually no risk of you causing a skid in the opposite direction through over-correcting.

ESC continuously monitors steering and vehicle direction, measuring lateral acceleration, vehicle rotation (yaw) and individual road wheel speeds. It intervenes when its algorithm detects either a sudden change in the operation of one or more of the wheels. This might be as a result of aquaplaning on water, or swerving to avoid an object.

Some ESC systems also include traction control, but it’s not an inherent component.

The reaction time of ESC is much quicker than a driver can react. However, it doesn’t increase the friction of tyres, so it’s not a system that will prevent all crashes. It mostly functions as a system that will allow you to regain control if the vehicle starts skidding.

ESC is said to reduce crashes by around 35%. If you have just passed your driving test you are much more likely to have an accident, therefore looking for a vehicle with ESC could help reduce this risk.

Skidding is caused by either too much speed or too much braking. To reduce the chances of skidding:

Tailgating is one common cause of skids on the road. You’re not paying attention and suddenly that vehicle in front brakes and you need to hit the anchors hard. Click here to have a read of this article about tailgating and you’ll find out why sometimes (surprisingly) it can be good.