Right Driver
Home › Advice › Tailgating – what is it and what are the fines?

Tailgating – what is it and what are the fines?

Tailgating is when one driver follows another driver within a distance that makes it impossible to stop if the vehicle ahead stops suddenly. It can range from unintentional through to aggressive and extremely dangerous. Drivers tailgate for a number of reasons:

2)      Protecting their lane from others moving into it

3)      Normalisation of the tailgating habit, meaning drivers don’t see it as dangerous

All instances of tailgating increase danger and heighten the probability that an accident will occur. If a vehicle is following at a safe distance, nose-to-tail accidents are unlikely. Tailgating another vehicle can cause road rage, or for the driver ahead to feel less safe and therefore slow down.

Because tailgating is the main cause of road rage, police have powers to issue on-the-spot fixed penalties for inconsiderate lane use (it also includes hogging the middle lane). The fine is £100 and three points.

What is a safe distance? 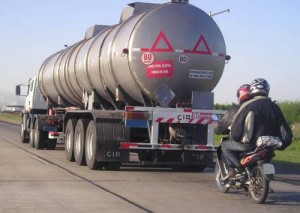 However, a two second gap is insufficient if the vehicle in front stops immediately, such as in the case of it hitting an immovable object such as a stationary lorry. This is because your reaction time will be between 0.5 and 1 second, and that only leaves 1 to 1.5 seconds to stop the car. Even sports cars will not stop from, for example, 60mph in one second, let alone an SUV with you and your two children inside. Therefore you will still be travelling at over 30mph.

If you can judge distances, a good rule-of-thumb is 4 to 5 metres per 6mph. So, at 30mph you’ll be around 24-30m behind the car in the front. On the open road you’ll be 48-60m behind the car in front. At the pinnacle of stopping distances, an Alfa Romeo 4C will stop from 62mph in 35m. So, with a one-second reaction time you’ll travel just under 30m at 62mph, and another 35m while stopping. So, 65m still means you will run into whatever has stopped in front of you.

There are situations where two seconds is definitely not enough and many road safety organisations say that three seconds is better in the dry, and four or five seconds in these conditions:

If the road is very icy it can take up to 10 seconds for some vehicles to stop!

Tailgating will minimally reduce fuel consumption, but hardly enough to warrant the increase in risk. A vehicle must be quite close to achieve any savings, and the savings are 20-25% at best. These savings are only while you are tailgating, and it assumes that the vehicle ahead is large enough to create enough of a slipstream (for example, a lorry). Tailgating a vehicle of a similar size, especially modern cars with a low coefficient of drag, will make very little difference.

Tailgating causes a reduction in vision of the road ahead. The closer you travel to the vehicle in front, the less you can see. Anticipation is a key skill in driving safely and by reducing the amount of road you can see ahead you reduce your ability to anticipate situations that could lead to an accident.

While it should now be clear to you that tailgating dramatically increases the risk of you having an accident, in heavy traffic tailgating allows more cars to use the road. Sure, there are accidents that create bottlenecks at times, but the simple facts are that if people follow one second behind the vehicle in front then you fit roughly twice as many vehicles on the road than if everyone follows at two-second intervals (excluding the length of the vehicles themselves). On the open road, though, there is no reason or excuse to tailgate.

So, we have a quandary (traffic volume vs risk of accidents) that would be able to be mitigated if we had autonomous cars for high density driving. In purely practical terms this is logical, except that accidents have emotional and physical consequences, therefore we should respect the gap that we leave to the vehicle in front.

Stay at least two seconds behind the car in front

If the vehicle behind you is tailgating you, check your own behaviour first. Are you unduly holding up traffic? If so you should either pull over and let vehicles overtake, or you should drive in such a way that doesn’t impede the traffic flow. If you are driving a vehicle such as a tractor, or your are towing a large trailer that means you are slower than other traffic, be courteous and allow other drivers to pass when possible.

You save negligible amounts of fuel by tailgating, and you risk getting a large fine which will wipe out all the savings and more.

0 comments on “Tailgating – what is it and what are the fines?”

3 Pings/Trackbacks for "Tailgating – what is it and what are the fines?"