A new report by the Institute of Advanced Motorists (IAM) reveals that 4 in 10 drivers admit they don’t focus at all times when behind the wheel. The other 6 in 10 are lying because it’s impossible to concentrate at all time. When you eat your dinner while watching Coronation Street you are not concentrating 100% on either task, but you’ll still remember whether the Platts had shepherd’s pie or cottage pie, and you won’t have hit yourself in the eye with your vindaloo-laden fork. 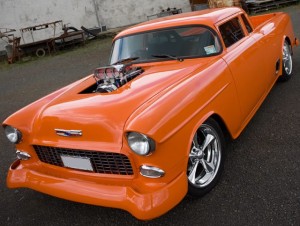 This car would definitely distract us if we drove past

All those that admitted concentrating all the time are saying they are never distracted by advertising hoardings, a hot guy or girl walking on the pavement, changing the radio station, a hotrod parked on the side of the road, the remnants of an accident, talking to a passenger or even just random thoughts popping into their heads. Our brains are not designed to work that way. We form efficient subroutines that handle repetitive simple tasks and, in general, driving is a quite repetitive and simple task (albeit with potentially serious consequences when it goes wrong). It is only when a challenging situation arises that we will divert our full attention to the situation.

Our brains have, for want of a better explanation, a little sentry that stands guard. It’s the same mechanism that means you can be engrossed in a conversation with someone, but still hear your name mentioned across the room by someone else. It evaluates the importance of all signals received by your senses and prioritises a response accordingly. Of course, there are certain actions which are known to dramatically increase the chance of crashing, such as texting and applying makeup, but that’s mainly because it takes your eyes from the road, and that makes the sentry blind.

This report and the figures smack of a publicity stunt by the IAM, who actually usually do amazing work and whose techniques should be taught as standard to all learner drivers. However, one thing is right: lack of attention by younger drivers is particularly dangerous. Young drivers don’t have the experience and the automatic reactions and muscle memories built into their brains that more experienced drivers have. This doesn’t excuse experienced drivers from deliberately not paying attention, but if momentary inattention was deemed to be so dangerous then transport agencies would ban billboards, car radios and transporting children; they would ban coach tour drivers from giving passengers guided journeys, and the police from radioing for assistance while driving. But they haven’t.

The IAM says: “While 73 per cent of over 65s say that they concentrate all the time when on the road, this falls to just 50 per cent for the least experienced drivers, aged under 24. Similarly, only 53 per cent of 24 to 34-year-olds focus all of the time.

“The most common reason for a lack of concentration is daydreaming, with a quarter of survey residents admitting this, while other factors cited include stress (22 per cent), thinking about what people will be doing when they arrive (21 per cent) and thinking about family, friends and personal relationships (21 per cent).

“Those in the north-east and Wales appear to be the most attentive drivers, with two-thirds saying they always concentrate, while it seems that those on London’s roads are the most likely of all to allow their minds to wander, as 47 per cent of people confess to not focusing when navigating the capital’s road network.

“A high proportion of motorists in Yorkshire, the south-west and Scotland are also guilty of failing to concentrate, with 46 per cent of drivers admitting they lose focus – a percentage that is far too high, according to IAM Chief Executive Simon Best.”

Obviously in a large city like London, there will be periods of boredom as traffic is stationary, and your brain will look for something to occupy itself. It will also tend to occupy itself with other things if you repeatedly drive the same route.

Best added: “Signs of not concentrating such as missed turnings or uncancelled indicator lights are commonplace. Simply not concentrating is a key cause of crashes yet it is not borne out in statistics because drivers rarely admit to it in police reports or on insurance forms.”

So, IAM, before putting out a press release like this, you need to clarify what ‘concentrating’ means because there’s a gaping chasm between momentarily being distracted by a yellow Lamborghini and composing an emotion-filled text to the boyfriend who just dumped you. You also need to explain that when you say ‘not concentrating is a key cause of crashes’, exactly what do you mean? Surely misjudgment and poor decision-making are by far the largest causes – whether you are concentrating or not, taking a corner far too fast, or travelling so close to the vehicle in front that it’s impossible to stop if it brakes suddenly won’t make much difference at all.

The survey polled 1447 respondents in 11 regions. This means the margin of error for each region could be as high as 10% at 95% confidence level.