Right Driver
Home › Advice › What is a skid?

What is a skid?

If we take a look at the Highway Code rule 119 we get the definition of a skid: 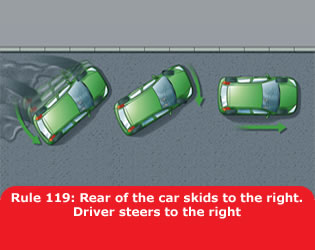 Skidding is usually caused by the driver braking, accelerating or steering too harshly or driving too fast for the road conditions. If skidding occurs, remove the cause by releasing the brake pedal fully or easing off the accelerator. Turn the steering wheel in the direction of the skid. For example, if the rear of the vehicle skids to the right, steer immediately to the right to recover.

Skids can be caused by a number of different manoeuvres, but it’s always a result of the action of one or more tyres exceeding the friction of the surface you’re driving on. The friction of the road is lessened by water, ice, gravel and the oily film that forms as it first rains after a period of dry weather. Your tyres’ tread depth, width and pressure will affect at what speed they overcomes friction.

How skids are caused

Oversteer is when you are driving around a bend and the rear wheels slide out. To correct the oversteer you must turn the wheels into the direction of the steer for just long enough that the rear wheels grip again. Any longer than that and you risk spinning the other way. You can see this demonstrated most clearly in the sports of drifting and rallying. Bear in mind that oversteer on a motorbike will require a different type of input than oversteer on a car. Here’s an example of what’s called ‘power oversteer’ in drifting. There are other types of oversteer such as ‘lift-off oversteer’ where you take your foot off the throttle and the resulting forwards weight shift causes the rear of the car to become lighter, making it easier for the tyres to overcome friction. Oversteer is difficult to control and recover from. Over-correct and you’ll end up in a ‘tank-slapper’ where you fishtail down the road from one side to another.

Understeer is where you turn the wheels but the car sledges straight ahead. This type of skid is very common in icy conditions. Almost all cars are set up to understeer at the limit because it is a more predictable type of skid and can always be stopped by going slower. Power understeer is caused by you applying too much throttle as you come out of a corner. This causes the wheels to spin and once they are spinning you have much less turning ability.

The more you turn the wheel when you’re in the skid, the less likely they are to grip. To regain control you need to scrub off some speed and reduce the steering angle. This video explains understeer.

Wheelspin is caused when you accelerate too hard on a slippery surface and the torque of the engine overcomes the available grip. It’s less likely to happen in a four-wheel drive car because you have twice as much tyre in contact with the road.

If you brake too heavily and your car or bike doesn’t have anti-lock brakes (ABS) then one or more wheels will lock up and you then you’re skidding. If you’re riding a motorbike and it’s the front wheel then it’s likely it will ‘wash-out’ and you will end up on the floor. A rear-wheel skid is easier to control on a bike.

In a car if you lock the front wheels you will have no steering. If you lock the rear wheels the rear of the car will tend to swing towards either the side that locks up first, or if there’s a camber or slope on the road, the direction of the slope. To regain control you have to brake less. The wheel with the least load on it will lock up first. If you are turning, it will usually be the inside rear wheel then the inside front wheel.

Almost all modern cars come with ABS, so this is much less of an issue. Cars with Vehicle Stability Control (VSC) or a similar suite of electronics will brake each wheel individually to bring a skid or loss of control back under control.

The four-wheel drift is more common in four-wheel drive vehicles. Because each wheel has some power going to it, there’s a greater likelihood of them all breaking traction and the vehicle will slide sideways fairly uniformly.

Hydroplaning is where standing water builds up a pressure wave ahead of the tyre which lifts it off the road surface and reduces your grip. The way to combat aquaplaning is to go slower and to ensure you have plenty of tread on your tyres that will disperse the water. This American video has a great explanation of what causes skids. Watch out of the ‘attractive skier’ at around 4:45.

For an explanation of highside and lowside motorbike skids, check out the videos in this article.

You can check out vehicle handling Highway Code questions here.