Sometimes the road surface is created with or coated with something that causes audible and/or tactile feedback to the driver to warn of approaching danger – i.e. you hear the noise the tyres make on the lines and you feel feedback through the steering wheel and the suspension. They can be in the form of lines on the edges or centre of the road to let drivers know they are drifting across the lane, or it can be across the whole lane to warn that a junction or other danger is ahead. While they can be cut into the road surface it’s much more common for a layer to be applied to the road.

They have many different names including rumble devices, rumble strips, bar markings, raised profile line markings, audio-tactile edge lines and more. There are some subtle differences between some of them, so let’s have a look at some examples.

The problems with them are that they create a lot of unwanted noise when used near residential areas and they are uncomfortable for cyclists. The surfaces themselves have the same braking friction as a normal flat road surface therefore there is no problem with grip, even for motorbikes.

These are sometimes referred to as bar markings or rumblewave surfacing and come in a few different varieties. They stretch across the whole of the carriageway (unless the carriageway is divided by a barrier or central strip and they alert drivers to take greater care in advance of a hazard ahead like a junction or a bend, and encourage drivers to reduce speed.

The strips are located before the hazard, i.e. not on the bend itself, in conjunction with signage warning the driver what is ahead. Authorities tend to use other measures to slow traffic down to less than 45mph before reaching the transverse rumble strips.

Transverse rumble strips have higher maintenance costs than lines because drivers can’t avoid driving over them.

This diagram shows the construction of a block paved rumble strip, and you can see a photo of a similar one below. 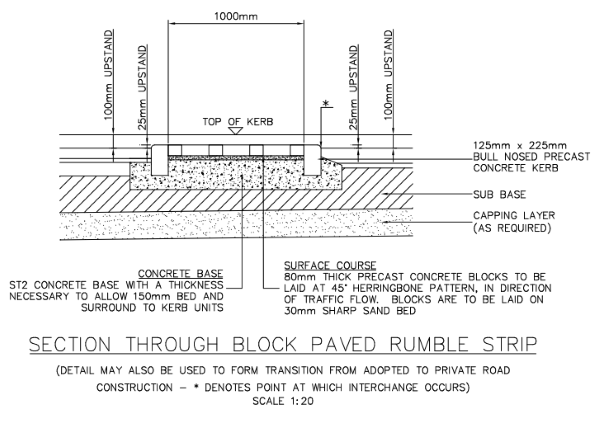 Transverse lines are also used in urban areas and can be made of bricks. They are frequently only a few feet in length and just remind drivers that they are entering a residential street. These types of installations can last well over a decade with minimal maintenance. 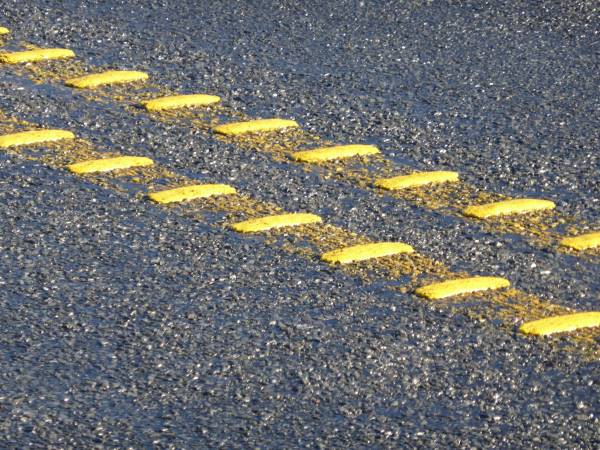 Raised profile line markings or rumble strips are used on the edge of the road or the centre line of the road to let drivers know that they are leaving the lane. They warn drivers in a safe way that there’s a risk of either leaving the road or crossing into opposing traffic. They’re a warning of driver fatigue or inattention.

The lines are lower maintenance than normal lines because drivers don’t like driving on them, therefore they experience less wear. They can be laid down in one strip whereby a machine melts thermoplastic which is laid in ribs along with the line. The thermoplastic dries quickly and forms ridges.

They can be produced in reflective or non-reflective grades and, because they have a 3D profile, they are more visible in wet weather which is important for motorcyclists which try to avoid road markings when it’s wet.

Preformed thermoplastic lines can also be used. They are used in conjunction with a primer sprayed onto the road surface. The two are heated, bonding it to the surface of the road.

This video shows a raised rib line being laid.