Right Driver
Home › Advice › Overheating brakes and brake fade – what can you do?

Overheating brakes and brake fade – what can you do?

Any brakes will overheat if you use them for a sustained period of time. This causes partial or complete loss of braking power which can leave you in a dangerous situation.

What happens when you brake? 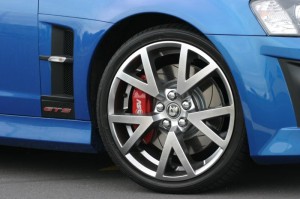 Let’s assume you have a modern vehicle with disc brakes. This means you have either a solid, ventilated, slotted or cross-drilled metal disc that sits inside your wheel. It will be clamped by brake pads which are pushed from either side by a number of pistons, or ‘pots’. Sports braking systems will have bigger pads and more pots. The image on the left shows the front brake discs on an Australian HSV GTS, commonly known here as a Vauxhall GTS. You can see it’s a large, dinner plate-sized metal disc, and this one has grooves cut into it (slotted rotor). On the left of he disc you can see the callipers (red) that have the pots and brake discs.

The clamping of the discs causes friction and this is what slows you down. The friction causes heat and that has to be dissipated. The discs heat up (you might see brake discs glowing if you want night-time racing such as rally stages), as do the pads. The brake pads are pushed via the action of brake fluid. Some of the heat will be transferred to the brake fluid, too.

Different braking systems have differing abilities to dissipate the heat, for example vehicles can have larger discs with ventilated cores that have air ducts from the front bumper to help cool them.

How do you cause brake fade?

Let’s say you’re driving down a large hill and you are pulling an unbraked trailer of 750kg. Usually a vehicle manufacturer will recommend an unbraked trailer is no more than 750kg. If you want to pull anything heavier, like a horse float or a large boat then your trailer wheels will have brakes. If your car weighs a tonne and a half, then your brakes now have to slow down 50 percent more mass.

Braking systems on modern vehicles are not designed to have the brakes continuously applied, so as you are driving down the hill you’re not going to want to pick up any speed because that could be dangerous. You’ll want to keep your speed either constant, or reduce it. It’s feasible on long downhill stretches that you might need braking force for several miles. If you only use your brakes to do this you will generate a lot of heat in them as they’re designed to work for several hundred metres at a time, maximum.

You will get some cooling from air passing over your brake discs, but not enough, and the only way your car will slow down is the dissipation of heat caused by friction on the pads.

Lorries have engine braking that they can use for long downhill stretches – this uses the compression of the engine as a brake. Cars and motorbikes can change down one or more gears and use the engine’s compression to achieve this. If you are driving an automatic or CVT gearbox, they will have a manual mode, or (in an automatic) possibly gears marked L, 2 and 3.

You don’t want to over-rev the engine, so it’s best to slow down early, i.e. at the top of the hill because the faster you are travelling, you have to dissipate exponentially more heat.

When you apply the brakes and heat is transferred to the brake fluid, eventually the fluid will boil if the brakes aren’t allowed to cool.

At first the pedal will feel spongy as air bubbles start to form in the fluid and you’ll need to push it down further to achieve the same braking power. Air is easier to compress than liquid. As the fluid boils eventually the brake pedal will travel to the floor and you will have zero braking power, and this can happen very quickly.

As brake fluid ages it absorbs water – it is hygroscopic. The more water it has absorbed the lower its boiling point. Older brake fluid is more likely to boil. Racing brake fluid boils at a higher temperature, and can be a good solution if you are towing large loads in hilly terrain. If you’ve boiled the brake fluid you will need to replace it as it will tend to boil more easily again.

New brake pads should be bedded in properly on used brake rotors because used rotors are smoother and more consistent. Every manufacturer has their own process, but usually it consists of driving the vehicle up to a particular speed, then heavily braking to a stop, and repeating that process a few times at set intervals.

If the pads aren’t bedded in then they don’t work as well.

Brake pads have an optimal operating temperature range. Above this the binders and materials in the pad will start to melt and this causes lubrication on the brake disc rather than friction.

As materials within the pad evaporate or ‘gas out’ this can form a layer next to the pad which has less friction, too.

If you overheat your pads as they cool they will create a glazed surface on the pad and rotor. The pedal will lose some of its tactility and will feel more solid, but without giving you much braking power.

Glazed pads can be abraded to try to restore them to working again. If they’re too badly glazed they will need to be replaced.

What do you do if brake fade happens?

As soon as you notice brake fade you need to get the speed off as quickly as possible. Change down as many gears as you can without over-revving the engine. Revving to the redline is OK – even revving slightly above the redline for a very short period is unlikely to damage the vehicle because you are turning the engine through the force of the wheels, not through applying more petrol and pushing it. It’s important that you get the revs up because low revs won’t slow the car down much, however, if you destroy the engine, then this presents a whole new problem.

Corners will reduce your speed because some of the forward momentum is taken up in turning. By the same logic, weaving will also scrub off speed, but this will be dangerous, particularly if there are other vehicles around or you are towing a trailer. Weaving should only ever be attempted on a very wide road with no other traffic once you have managed to scrub off almost all your speed.

Try gently applying the handbrake. If you are in a car with a hydraulic handbrake, this could cause you to spin as it will apply itself with full force, and only on the rear wheels. If you have a conventional lever handbrake you can try applying it. Its power won’t last long, though, as it’s not designed to be a brake that retards the car, just one that holds it in position when it’s stopped. Never put your automatic car in park or reverse, or your manual car in reverse while you are travelling forward as this will destroy the gearbox and then you’ll have no engine retardation.

Look for exits early on, especially if you find yourself picking up speed. It’s best to get off the road quickly. Many hills have little side roads that go back uphill, or even into fields. A closed gate will cause damage to your car, but not as much as running it off the side of the hill at a huge speed, or running head first into a vehicle coming uphill.

If you are still picking up speed you now must act very quickly. Assess the terrain. A hedge will help you reduce speed, as will bushes, shrubbery and very small saplings. Be careful that the terrain on which they are growing won’t launch you into the air, and bear in mind it could damage your suspension seriously, or spin you into the line of traffic. Hitting anything more than a sapling could bring your journey to a more abrupt stop, and this is an option if it’s just you in the car and you think you can aim for the car to hit the tree on the passenger side to minimise risk to you.

Stone walls are less forgiving than hedges and will seriously damage your car as well as risk turning it around. Fences, depending on the type of posts, will help slow you down. Large corner posts are more likely to stop you dead.

Once you have managed to stop, your brakes will be red hot. They may be smoking. If you have managed to come to a stop without adding further damage to your car, you’ve been lucky. You need to let the brakes cool, however, if you leave the car in one position there’s a high probability that the heat of the pads will warp the brake rotors. If you can keep the wheels turning, even slowly, that will prevent warping. Keep it in first gear so it doesn’t get away from you again. Keep your hazard warning lights on if you are still on the road.

0 comments on “Overheating brakes and brake fade – what can you do?”

1 Pings/Trackbacks for "Overheating brakes and brake fade – what can you do?"