Joining a motorway is a driving manoeuvre which can have a huge effect on surrounding traffic if done incorrectly. To make the maneouvre, match your vehicle’s speed with that of the vehicles already on the motorway, spot a gap, indicate and move into it if it’s safe to do so. If you’re travelling slower than the vehicles on the motorway you will cause them to brake and that can increase traffic congestion by creating a jamiton.

A number of factors are considered when slip roads are constructed, including the budget, space available, characteristics of the road, the vegetation, the guardrail, signage and any specific design features to beautify it.

How are slip roads designed?

Slip roads or ramps that bring traffic onto a motorway must get vehicles up-to-speed from a standstill, usually from a traffic light either on the slip road or at the head of the slip road.

Slip roads might merge onto sections of motorway which are 50mph, 60mph or 70mph. The lower the speed, the shorter the slip road needs to be. However, the gradient plays a part here: a 6% uphill gradient can double the distance required to get up to 60mph whereas a 6% downhill gradient can halve the distance. However, drivers tend to accommodate for these gradients somewhat by judging how much room they have to match their speed and adjusting their acceleration accordingly.

Visibility of the motorway from the slip road

Junction 26 westbound on the M25 at Waltham Abbey is a single-lane uphill slip road with low visibility of the motorway. This makes it more difficult for the driver to judge the speed of the traffic already on the motorway as it’s partially obscured by the vegetation to the right, and the crest of the slope ahead.

The ramp curve influences the speed that traffic can attain before getting onto the ramp. Taking junction 26 again, this time eastbound, the ramp curves around 110 degrees with minimal visibility around the curve due to vegetation, but then does have a huge merging lane for traffic to get up-to-speed.

The lane to get up-to-speed from junction 26 is almost as long as this photograph shows.

The slip road’s slope between an overpass or underpass influences how long the ramp must be. It can’t be too steep downhill otherwise it becomes dangerous in wet and icy weather, and it can’t be too steep uphill otherwise heavily laden LGVs will struggle to crawl up the hill. The junction below (23 on the M25) shows a long downhill slope with excellent visibility of traffic already on the M25. This allows even very large lorries to reach sufficient speed.

At junctions used by a lot of lorries, it’s more important to have a slope and length which is favourable to heavy vehicles to minimise their impact on traffic flow. As mentioned in ramp slope and merging speed above, the length of the ramp influences how much acceleration a vehicle must use to get up-to-speed (if it’s even possible). However, building slip roads is expensive and there may be budgetary constraints that prevent a slip road of optimal length. There may also be space constraints, especially in heavily urbanised areas.

Many slip roads are single lane. However, at busy junctions they could be two-lane with a heavy vehicle or bus lane, too, like junction 3 westbound onto the M4. The width influences the cost and the volume of vehicles that can fit on the road. However, two-lane slip roads usually merge into one lane before merging onto the motorway. Distance must be allowed for vehicles to merge safely. 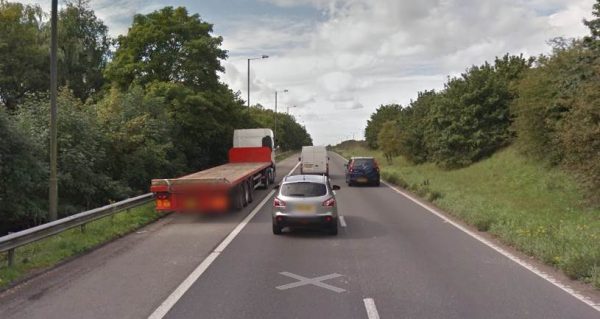