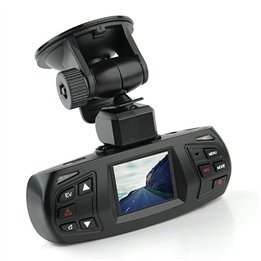 Dashboard and helmet-mounted cameras are gaining popularity as insurance scams grow. It’s becoming more and more common to see motorcyclists with GoPros fixed to their helmets, and cars with dashboard- or windscreen-mounted cameras. Cyclists wear them to prove their innocence in vehicle-related accidents, and truck drivers use them to avoid expensive insurance claims (‘crash-for-cash’) where other motorists have performed dangerous manoeuvres (something the government is cracking down on as whiplash injuries cost two billion every year).

The cameras have come down in price and reasonable quality ones can be purchased for well under £100, such as this Incredisonic Falcon F-360, with models growing in complexity and features (such as GPS). Or you can check in your local automobile store, such as Halfords.

Features – how to choose

Suitability for your vehicle

First, check that the camera is suitable for your vehicle. If you ride a motorbike or bike, then the camera needs to be small enough to fasten to your helmet, and have enough battery power to last for your average journey (and preferably a multiple of that so you don’t need to keep charging it).

If you have a car or lorry, the camera will either mount to your dashboard, window or rear-view mirror. It may even completely replace your rear-view mirror. A mirror replacement can be a problem in some modern cars as the mirror assembly can often contain rain and light sensors, or other cameras and screens (such as a reversing camera display).

If the battery life is poor, you may need to run a cable down to a cigarette lighter jack and that is less convenient.

Check that a suitable mounting kit is provided with the camera. It should be sturdy enough to support the weight of the camera in all conditions.

In a car it should be easy for you to remove the unit for security purposes.

On a helmet, installation should be fairly simple as it will be a self-contained unit; on a car, check whether you need to wire it directly into any systems as you might need to take it to a specialist.

Some cameras will record front and rear either with two lenses on the same device, or an input for a second lens facing rearwards.

The angle of the lens will determine how much you see. If the lens gives around 150 degrees then you’ll see most of what happens.

Some cameras come with a microphone. These can be useful to pick up any post-accident conversation, particularly admission of guilt, so be careful what you say in an accident. Wind noise might be a problem on a motorbike.

The amount of memory will determine how much video you can record. Many devices record to SD cards, in which case you can use whatever size you want, but some devices have internal memory and will transmit to a wireless device.

Check whether the unit comes with a storage card.

Many cameras will record on a loop mode where they will record, for example, the previous 10 minutes of action.

The higher the camera resolution the better, but the more memory you’ll use per second of recording. Higher resolution generally means you’ll be able to pick out details like number plates more easily. Look for a camera that will record at least 720P (1280x720px), and preferably 1080P or full HD at 30 frames per second.

Pricier units often come with GPS which can be used to prove that you weren’t speeding, for example.

Some units have g-force sensors and will turn on if your vehicle is hit whilst parked (unless you’ve removed it from the vehicle, of course).

They can also be configured to turn on in the case of an ‘event’, such as heavy braking.

Some units have small screens to preview recorded movies. Other units have removable media such as an SD or micro SD card. Some units will wirelessly transmit files to a computer or smart phone.

Most units don’t support night vision recording (e.g. via infra-red). While the better quality cameras will adjust the white balance, ISO and exposure compensation to allow you to record in very low light, if you want true night recording you will need to get a unit that specifies it supports it.

Some high-end cameras feature motion detection so they can be used to take security images that are transmitted to a remote device.

There is an alarming new trend of ‘flash-and-crash’ where a seemingly courteous driver will flash a car struggling to get out of a junction, before accelerating and driving into them. Proving the driver flashed his lights is difficult without video evidence. The other problem with this is that the driver that flashes is usually at a right-angle to the vehicle pulling out, and therefore out of the view of any camera unit.

Only around three percent of drivers in Britain have a camera installed. They are much more popular in places like Russia where insurance premiums are substantial and video evidence is important in a claim.

This technology is not mature yet. It is rapidly decreasing in price as sensors and electronics get cheaper, so if you wait a year you will get much more for your money.

Vehicle manufacturers may eventually build the cameras into the vehicles. Subaru already has EyeSight technology which uses two cameras to create a three-dimensional view of the road ahead so that it can judge distances for cruise control, and brake in an emergency. It wouldn’t take much modification to allow this to record images.

A quick look around YouTube and you’ll find plenty of examples of cyclists who have had drivers open car doors right in front of them, like this one on London’s Uxbridge Road. Jump forward to 1m 40s.

Vehicle stopping distances: what affects them and how do you calculate them?

The distance it takes a vehicle to come to a complete stop when the brakes are applied fully is called...