If you are thinking of taking some advanced driving lessons and going for an Institute of Advanced Motorists membership, it’s well worth doing. I passed my test in 2014 after having five observation drives and doing quite a lot of practise in between. The whole process took about 4 months and I ended up having two goes at the test because in the first one (after two hours of intense driving) I missed a stop sign, which would fail a normal driving test. The following tips are based on my experience taking the test in a car. Some of them will be relevant to motorbikes, but perhaps not all.

By far the most beneficial change in my mindset was my internal dialogue. By the time you’ve been driving a few years (in my case, 23 years) you will have developed very efficient neural networks to deal with the majority of basic driving – i.e. you don’t have to think about steering, signalling, braking, etc – and it’s only if you are in an emergency situation or driving somewhere unfamiliar that you will have to think about it.

When you start doing IAM training, though, you realise firstly how much you have forgotten of the original advice your driving instructor gave you and, secondly, that your ‘cerebrally efficient’ way of driving is basically just ignoring a lot of things so that you can pay attention to your other thoughts, like what you will cook for dinner.

The main change in my driving style was to mentally talk what was happening. This is like a commentary drive (read more here). It forces you to take account of a great many different things that are happening on the road in real time and you become a proactive defensive driver rather than a reactive driver because you mentally become aware of situations unfolding.

At first it seems like overload, but with a few weeks’ practise you can get very fluent at it.

But first, you need to know what to look for:

Observing the road for dangers

Many drivers have a habit of looking at the vehicle in front rather than scanning for dangers. While I wasn’t bad at this out of the box (something I attribute to a lot of time spent in a racing car where you have to be aware of everything around you), there were dangers that I didn’t necessarily recognise as dangers at the time. My instructor gave me lots of extra little things to look out for in different scenarios.

The best book to read to find out what these are is Road Craft, which is the advanced driving manual – click here to check it out.

As well as his advice I read around other seasonal dangers in the road, like deer.

The lines to drive

One thing I found quite difficult was changing my driving lines. This time the racing experience didn’t do me any favours because the racing line is not the line around the corner where you get the best visibility. I took several drives specifically to practise cornering lines. It still feels a little odd.

Be familiar with your vehicle

This isn’t going to apply to many people, but I had a different car each time I had an observed drive because I review cars for fun (believe me, there’s not much money in it). Having a Subaru WRX and an Audi S3 is a lot different to a Toyota Corolla, and the Toyota Yaris that I eventually passed the test in.

Work on what the observer suggests

If we take a look at my report sheet then we can see that the observer has written some advice about overtaking technique (I was relying on the Audi S3’s power to rocket me past, rather than approaching it properly). I also missed a speed limit sign twice, and this is something I’d done before, so I made a conscious effort to acknowledge the signs. 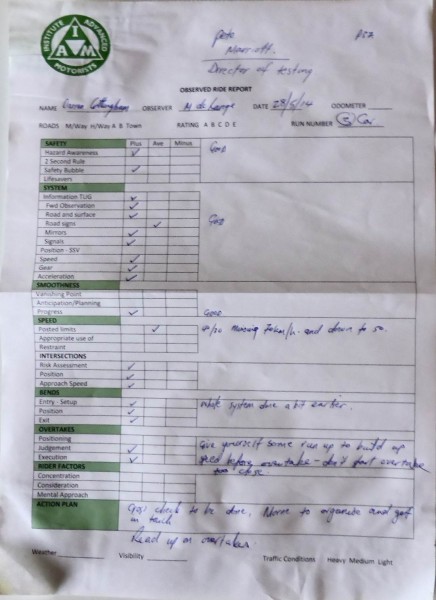 Another trick my observer told me was to deliberately acknowledge each road sign – once you start doing that you’ll realise just how many signs there are!

The Institute of Advanced Motorists designed these 10 tips for you, too (opens in a new window).

Watch this video and you’ll see just how much can be going on, even if you are on a country road.

Types of jobs where driving is necessary Let's start with a list of jobs to give you an idea where...