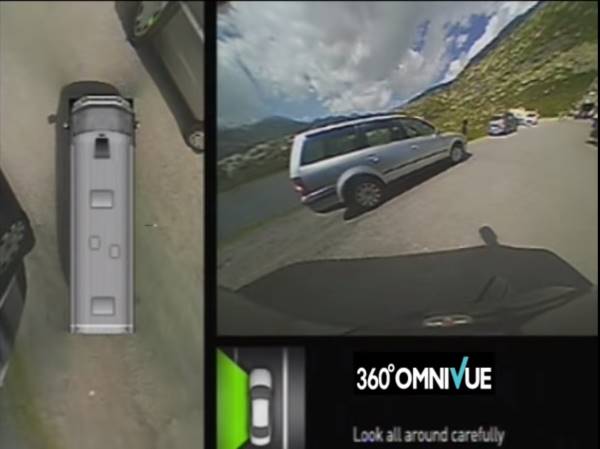 In the lead up to fully self-driving cars, the car makers are including more and more technology that helps prevent accidents. This article demonstrates a few of them:

The two biggest improvements in handling are to do with much better tyres and suspension, but electronics is playing its part too. If the driver asks more of the tyres than they can provide, systems such as antilock brakes can take over. Taking it a step further, electronic stability control allows the vehicle to independently brake each wheel to help bring the car back on track, and that’s the basic of the first two technologies we’ll look at: trailer sway assistance and roll-over mitigation.

Light, high-sided trailers a susceptible to cross winds, turbulence from other vehicles and having their balance upset by bumps in the road. If the trailer starts swaying from side-to-side the oscillations can get more and more severe until the trailer can cause the towing vehicle to lose control. It’s very difficult for the driver to correct the trailer’s swinging; they usually make it worse. But using the same system as electronic stability control, each individual wheel can be braked to bring the trailer back into line. Note, this doesn’t brake the trailer’s wheels, only the wheels on the towing vehicle.

High-sided vehicles such as vans and SUVs are at risk of rolling over in sharp evasive manoeuvres. The same electronic stability control system is used to brake wheels independently to help keep the vehicle upright. This system is provided by Bosch which manufacturers many different types of safety system and licences them to automotive manufacturers.

Sensors can look ahead all the time and never get tired which is why they’re so useful in system such as predictive emergency braking. A video camera and radar sensor in the front of the car look ahead, constantly monitoring the gap between your car and the one in front. If the car in front brakes heavily and you appear to take no action the system might provide a warning sound or a vibration in the steering wheel and will prepare the brakes (usually by moving the calipers closer to the discs to gain a fraction of a second when you do finally brake.

If you still don’t respond the car can brake on your behalf to, if not avoid a collision, at least minimise the severity of impact. Predictive emergency braking can also augment the driver’s inputs to the brake, giving extra braking power if needed, but only to the point at which the anti-lock brakes kick in.

The video below explains Mercedes-Benz’s system which mainly aims to reduce the impact speed rather than consistently bring the car to a complete stop.

Some systems just provide a warning in the form of a visual, audible or tactile alert.

Hill hold assist prevents a vehicle from rolling back into another one behind it by keeping some pressure on the brakes as the driver transfers their foot from the brake to the accelerator. As the system detects that enough power is provided to pull away, the brakes are released. Hill hold is also available on a few motorbikes. This video from Bosch explains how it works.

When you brake the energy is lost as heat. Some cars capture some of this energy, using a generator to charge a battery which can either be used to propel the car (in the case of a hybrid or electric vehicle) or stored in a battery for use by other vehicle systems such as power steering.

Audi demonstrated the extreme end of self-parking technology in 2013, as seen in the video below, but other systems are not as smart – they just identify a parking space and help you steer into it.

The system below is from Mercedes and shows the vehicle scanning for a parking stop then assisting the driver to reverse into it.

Using cameras with fish-eye lenses, a surround view can be constructed of the vehicle which assists with parking and manoeuvring in tight spaces. This is very useful on long motorhomes and large SUVs. As you can see from the video below, the system simulates a bird’s-eye view several metres above the vehicle, showing exactly the terrain and distances. A reversing camera with distance lines augments the bird’s-eye view.

If you've got a practical driving test on Wednesday 15 October 2014 it might be cancelled because some driving examiners...