What is side underrun protection?

Side underrun protection consists of guard rails which help prevent other road users from going underneath a heavy vehicle or trailer in an accident.

A long vehicle often has to take a much wider turn into a corner. This can confuse other road users who try to overtake but end up driving under the trailer as the truck turns.  It’s particularly risky for cyclists who are knocked off their bikes in substantial numbers in urban areas, so much so that it is now mandatory to have this protection fitted to a truck when entering London (under the Safer Lorries Scheme), and all new vehicles over 3500kg must have them fitted under UNECE Regulation 73. One third of cyclist deaths are caused by cyclists being trapped under the wheels of a lorry in this way. When long vehicles turn a corner the rearmost trailer wheels follow a curve with a radius less than that of the outside wheels, as you can see in the diagram below. The swept path is the maximum difference between the outside wheel’s path and the inside wheel’s path. If the driver misjudges the turn, the inner rear wheels of the trailer could mount the kerb, hit road furniture or signs, or (worse) hit a pedestrian or cyclist.

When a very sharp turn is involved into a narrow driveway or street a long vehicle might need to swing out wide, moving into the adjacent lane to give it enough room to complete the turn. Vehicles over certain lengths are banned on many streets where it would be impossible for them to manoeuvre within the street. Signs prohibiting long vehicles look like this:

As well as turning into streets and driveways, roundabouts can pose a problem for some long vehicles, especially mini-roundabouts. 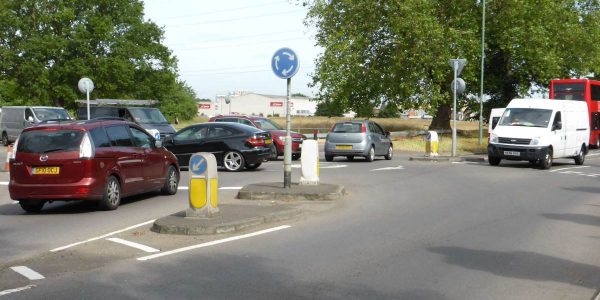 Mini roundabouts like this one in Hackbridge, London are just painted so that long vehicles have less problem negotiating them

Motorists can help at junctions by stopping at or behind the line so that turning heavy vehicles can turn in more easily. Lorry drivers still need to judge their turn, but it gives them more room.

In cases where there are vehicles parked on the side of the road, respecting the marked bays will make it easier for all vehicles turning into the street and reduce the risk of a strike by a trailer due to off-tracking, as shown below.

Swing out occurs when the back corner of the trailer follows a significantly wider arc than the rear axle and can hit objects or people standing close to the kerb. 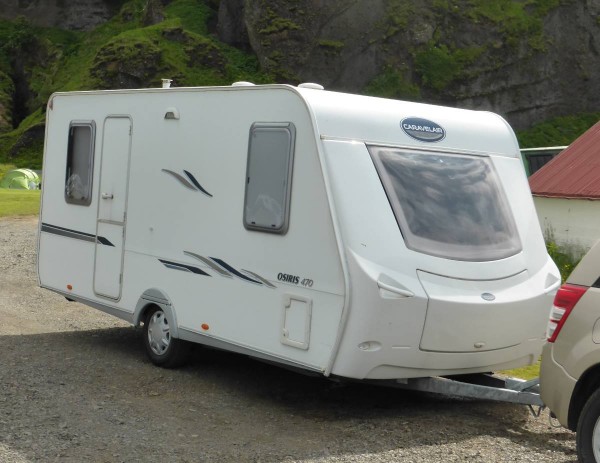 Car owners undergo very little training in towing compared to a lorry driver. Drivers should be aware of their swept path, swing out (especially on caravans with long overhangs), and off-tracking that occurs when turning a corner. The best case scenario is that the inside wheel of the caravan brushes the kerb, and worse case scenario is that it knocks a cyclist off and causes a fatality.