Every year several children die and many are injured as a result of being run over in a driveway, usually by a parent, friend or relative. The majority of these children are between 2-5 years old as they have rapid mobility (i.e. can move quickly), are curious, are difficult to see, and have very little traffic sense. Even at low speeds, the child can suffer horrific crush injuries if the car rolls over them. SUVs are over-represented in the statistics because their high stance can cause a blind spot of up to 10m behind the vehicle. Add to that the increasing tendency for vehicles to have smaller rear windows for better crash protection.

Most new vehicles do have measures to prevent this – reversing cameras and reversing sensors – but there are still millions of legacy vehicles on the road.

The driveway is frequently used by visitors – they might not realise a child is there, or will assume that you have them inside or under control

The children are boys – boys are over-represented in the statistics

The driveway is the main pedestrian access to the property

The vehicle is tall, e.g. an SUV or van, or it has a tray such as a jeep/utility/pickup-type vehicle

Play areas are not fenced off – children might chase a ball onto the driveway, or be used to playing on it at all times

The weather is fine – it’s more likely that children will be playing outside.

The majority of new cars come with, at minimum, reversing sensors. These are usually sufficient to detect something the size of a toddler, but won’t give you enough warning if you are reversing very quickly. Therefore make sure to keep your speed down.

Many cars come with reversing cameras of various different kinds. Both cameras and sensors can be retrofitted to almost all vehicles. If you do fit a third-party camera, get one that links to your reverse gear so that as soon as you put the car in reverse the camera activates.

The best type of cameras come with simulated birds-eye view and wide angle rear camera. The image below is from a Honda Odyssey. 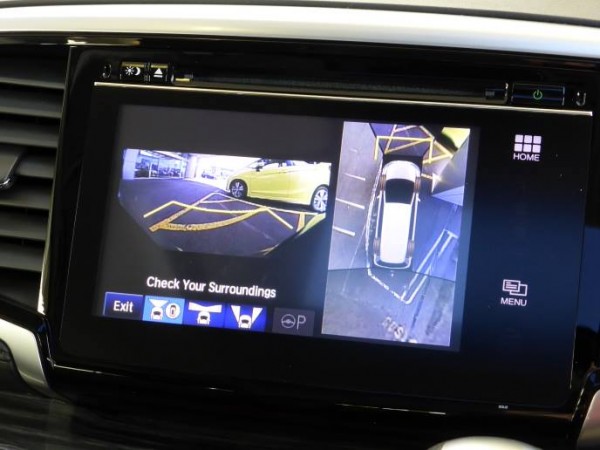 If you are leaving your house and not taking your children, an adult or responsible older teenager should be looking after them and know where they are. You can check around the back of your vehicle before you start reversing. If you are taking children, ensure that they’re all in the car and buckled up.

Windows should be clean and your mirrors positioned correctly (read more here).

If you are the only adult home and you need to move your car, put your children in the car while you move it.

Fence off play areas from the driveway and use a childproof gate.

Use a gate at the end of the driveway to stop visitors parking there.

If you have workmen visiting, make sure you know where your children are before they leave.

Educate your children about the dangers of reversing cars, and also the dangers of playing in cars. You should always put your car keys in a place where children can’t take them. This education will help them stay safe in public car parks, too.

This survey from Iain Goodwill Trust and RoSPA outlines the risks to children in driveways and carparks. Quick stats are: