Driving in an earthquake

Large earthquakes aren’t common in the UK (in fact, the largest we’ve ever had was only 6.1 on the Richter scale and was offshore), but they are common in other countries that you might take a driving holiday in, such as Italy and Greece. Or if you head to New Zealand (often called ‘The Shaky Isles’) or Australia there can be some large ones there.

How do you know if an earthquake is happening?

Earthquakes only usually last between 10-30 seconds and in that time the earth could give a sudden jolt followed by a rolling movement, or it could just build into a rolling movement. You might feel this in your car as if either the road is suddenly bumpy or that your tyres feel flat.

An easier way to recognise it is that trees, pylons and traffic signs will sway even if there’s no wind. You might also be able to hear the earthquake (or the results of it) if you are close enough to the fault line. If you’re in a rural area you could see landslides happening, whereas if you’re in an urban area with tall buildings glass might fall onto the road.

Cracks can form in the road – they can be deep enough to rip off a wheel – and it could look like dust is rising in the distance. 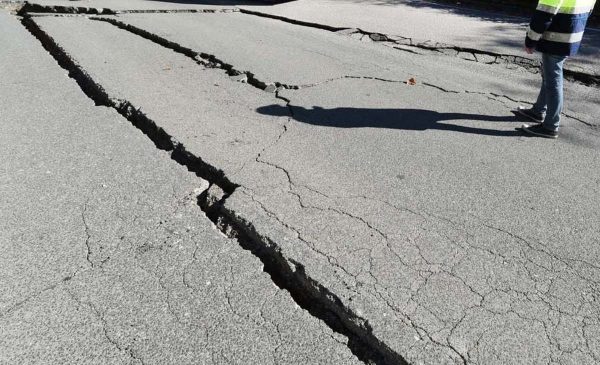 Cracks in the road appeared after an earthquake

If there’s been a strong earthquake, aftershocks will follow that could also be quite large.

Should you stay in your vehicle during an earthquake?

The ideal situation is that you stop and use your vehicle for protection until the shaking stops. If you’re in a car park you can get out of your vehicle and crouch next to it in case the building collapses as this will often create a survival space when the vehicles surrounding you absorb the weight and impact of any falling structure.

If you are in an area surrounded by hazards you can try to get out of the way of them to a safe place.

If it’s daylight and you can see clearly you can proceed slowly, bearing in mind that around any corner you might find a tree down, a landslide, a bridge out or some large cracks in the road.  If it’s nighttime, you will find it difficult to see large cracks and drop-offs on the road. Fences could have been damaged and livestock spooked, so take care on unlit country lanes.

Report yourself safe to your family. In serious earthquakes Facebook has a check-in system. You can send an SMS or make a call but if power is down then cellphone towers will have limited backup power reserves and could fail.

The safest place is out in the open where the ground is flat with no landslide risk, with no trees or pylons to fall on you, and you’re away from the coast where there could be a tsunami risk. It’s unlikely you’ll be in one of these places.

Offshore earthquakes can trigger tsunamis which can extend more than a couple of miles inland. If you’re on a coastal road then you need to either get inland or to much higher ground. You could have only a few minutes to get away from the shore as tsunamis can travel at up to 500 miles per hour. It’s best to try to get higher rather than further inland. Once the tsunami hits land it will slow down but will still be too fast for you to outrun on foot.

If you are trapped with or in your vehicle

A strong earthquake could cut off your section of road by destroying bridges or creating fissures and cracks in the road that are impossible for you to drive over. You could be trapped in your vehicle if power lines fall on it.

The first thing to do is stay calm. Don’t call emergency services unless you are either in mortal danger at that moment, or a situation is developing which means you will be; emergency services will be receiving hundreds of calls from people generally in a worse situation than you.

Check social media (Twitter and Facebook will usually be the quickest to respond), newspaper websites (they will take at least 15 minutes to report it) and the British Geological Survey website. Anything above magnitude 5 is likely to have caused some damage.