Right Driver
Home › Advice › Can you have different sized wheels on your car?

Can you have different sized wheels on your car?

Hot rods have big wheels on the back and smaller wheels on the front, so why don’t we see this on regular road-going cars? The Chrysler Prowler, which was supposed to emulate a hot rod with its 17-inch wheels up front and 20-inch wheels at the back, did, but in most cases, wheel diameter is not different at all (or only very subtly different).

Each tyre comes with three measurements:

Width is expressed in millimetres, for example, 205. Sidewall height is expressed as a percentage of the width rounded to the nearest 5, e.g. 60 (meaning 60% of the width); this is also called the aspect ratio. Diameter is the inner diameter in inches, e.g. 15. We’re not 100% sure why both millimetres (metric) and inches (imperial) are used, but this article gives a plausible explanation.

So, you end up with a tyre measurement that looks like this: 205/60R15. The R relates to the type of tyre, so sometimes you’ll see ZR or other letters, but that doesn’t make any difference to the dimensions of the wheel.

However, if we take the aforementioned example of a hot rod, then the difference in diameter is far more obvious: the front wheels are noticeably smaller. 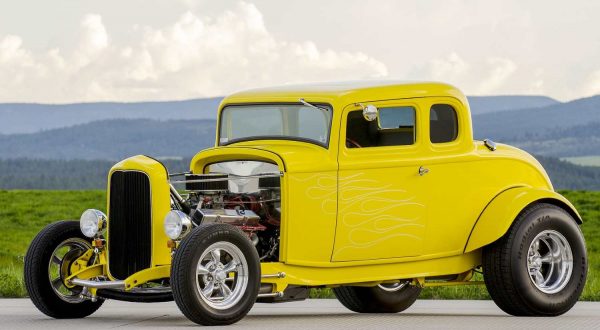 Why do cars have the same sized wheels?

The vast majority of cars have the same sized wheels and it’s primarily due to economics. It’s much cheaper to manufacture and ship a car where all four wheels are exactly the same than it is to buy half as many of two different types of wheels due to the economies of scale in manufacturing. Yes, you will still see cars with wider wheels on the back, but these are almost always expensive rear-wheel drive, high-performance cars where the extra width on the rear is a function of grip and image.

If we take the bulk of modern cars they are front-wheel drive therefore they need a tyre which is reasonably wide on the front to cope with both propulsion, steering and braking. The rear wheels need to be of a similar width because a) it would look odd if they were narrower and b) vehicles tend to be lighter at the rear as the engine is at the front, so they need to generate enough grip to not slide on corners.

There’s a limit to how wide wheels can be on the front otherwise they intrude too far into the engine bay when turning (or it reduces the turning circle).

In a four-wheel drive car, if the front and rear wheels were a different diameter it would need a centre differential that could cope with the difference in rotational speeds between the front and back wheels.

How short can a tunnel be before it’s not a tunnel anymore?

When you drive underneath another road, you're effectively driving through an enclosed space, but this isn't technically a tunnel, it's...