Right Driver
Home › Advice › What’s traction control and how does it work?

What’s traction control and how does it work?

To understand traction control, you have to know what traction is. Traction is the ability for a tyre to transmit force to the road without slipping. It’s a function of the friction between the tyre and the road surface. The more traction there is, the less chance there is of the drive wheels spinning when power is applied (i.e. you’ve pushed the accelerator) or the wheels locking and skidding when braking is applied. Once a wheel starts spinning or skidding, i.e. it breaks tractions, the friction reduces meaning that you don’t accelerate as fast or stop as quickly.

The key to a fast time in drag racing is to spin the wheels to warm them up, then not spin the wheels when the lights turn green. This gives the most traction and therefore the best acceleration

ABS, or anti-lock brakes, helps prevent skidding under braking while traction control helps prevent the drive wheels from spinning under acceleration. The point of maximum traction is achieved just before the wheel starts slipping on the surface, so the purpose of traction control is to detect when the wheel starts to slip and then either reduce the power or apply the brakes to bring the wheel’s speed and turning force back under the threshold of when it slipped.

It does this using the same sensors that are used for antilock brakes. They detect if a wheel’s speed increases suddenly in relation to the other wheels, sending the measurements to a central processing unit which, in turn, sends instructions back to either the brake callipers to rapidly ‘pump’ the brakes, or the throttle mechanism to reduce power to the engine. It does this in a fraction of a second and, when the wheel has regained traction, the system returns to monitoring and comparing the speed of rotation of the vehicle’s wheels.

Older traction control units could be quite crude in their operation, cutting power to the wheels for too long or being oversensitive. The ideal situation is that if you press the accelerator to the firewall that the car accelerates to its maximum ability.

Not all road surfaces have the same level of grip and traction control can’t give you any more grip than the road will allow. Ice will still be more slippery than tarmac, whether you have traction control or not, it’s just that traction control will activate more readily when driving on ice.

Traction control is useful when: 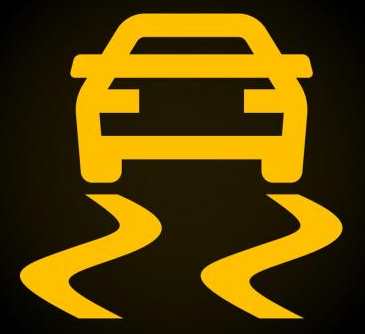 If this light flickers it means that traction control is being activated and you should drive more smoothly and with less throttle input. Traction control can usually be turned off, although it’s not advisable to in everyday driving. The only times when disabling traction control may be an advantage is when using snow chains or in very deep mud where rocking backwards and forwards can help free you.

Traction control is not usually included on its own in a car. It is part of a suite of electronic aids that could include ABS, electronic stability control, brake assist and electronic brakeforce distribution.

Drivers must take care to monitor their speed and acceleration in slippery conditions. In snowy and icy conditions you will be able to accelerate much more quickly with traction control than without.