This car usually has just a few miles on the clock – perhaps up to 10. It will have only been driven as described above in order to move it on and off transportation options. If the customer has ordered some specific extras then it might have been driven to have those extras fitted. It is defined as new if you are the first person to own it. It’s unlikely to have driven any miles on the road because it would need to have been registered.

Dealerships use a car to demonstrate to customers and for the sales reps to take home to familiarise themselves with it. Once the car gets a certain amount of miles on the clock it will be sold and another demonstrator will be used. These cars will be cheaper than new ones. 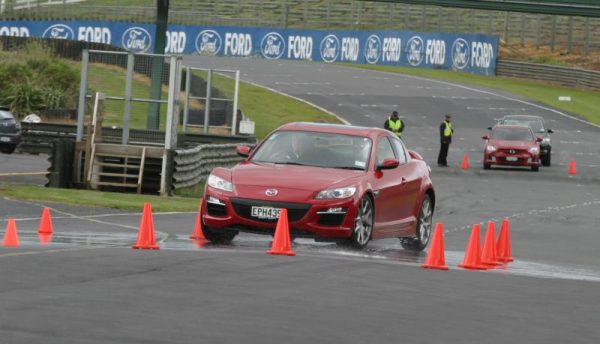 One careful lady owner…Mazda RX-8 at overseas launch for several Mazda models at a racetrack. These vehicles would have been on-sold to the general public as ex-demo

The main vehicle distributor will have a ‘press fleet’ when the vehicle is launched. This consists of a small number of cars which are loaned to journalists to write reviews. These cars are on-sold as demonstrators, but they are likely to have been roughly handled, possibly on a race track. Press cars often show more tyre wear than you would expect for the number of miles. If you are purchasing an ex-demo car, it pays to ask whether it was a press car or not.

A dealer will usually try to sell the last few cars using a run-out special offer. This usually means that there is a new version on the way. Perhaps the new version is already here and the dealer is discounting to get rid of stock. Before you choose this option, check whether the upcoming model is a completely new version or just a facelift. Facelifts tend to have minor cosmetic changes, whereas a brand new model will more than likely have better fuel economy and improved specifications.

Private sales are where you purchase a vehicle from a private individual rather than a licenced dealer. You have less rights with a private sale and you essentially purchase the vehicle as-is, where-is.