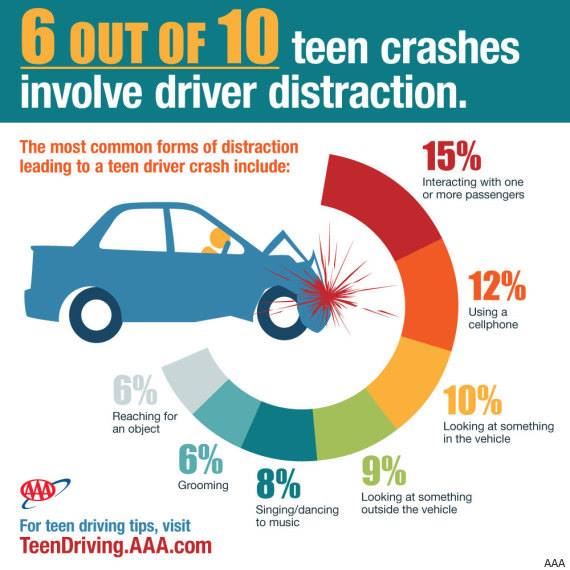 The more experience you have at driving, the less likely you become to have an accident, and therefore teens are most at risk of accidents simply due to not having had as much time behind the wheel.

The above study by AAA.com (American Automobile Association) shows the types of crashes caused by inattention and distraction.

The biggest portion at 15% is interacting with passengers. Teens often are excited to be going places, and a bit of good natured fun can lead to distraction. But, mates can be a teen’s biggest ally if they are sensible. Other studies have shown that a sensible, experience passenger can point out developing dangers to a less experienced driver. Considerate passengers also know how to not distract a driver.

A sensible teen driver can remind mates to help with the driving rather than causing distractions.

Using a cellphone for anything while driving (even a hands-free one) increases the risk of an accident because it takes the driver’s attention from the road. While the figures vary wildly as to how much more likely you are to have an accident and die if you are using a cellphone, the consensus is that it’s at least twice as likely and it’s possibly up to seven times as likely. At least 12% of crashes are caused by cellphones.

Looking at something inside the vehicle

Whether eating a Kitkat or adjusting the fan, your attention is momentarily taken off the road. Some tasks can be learned very efficiently and become minor distractions, such as changing the air conditioning, but others (like eating and smoking) shouldn’t be done while driving.

Looking at something outside the vehicle

It’s easy to be distracted by unusual scenes, good looking people, nice cars, stunning scenery and more. In fact, signage is one of the main causes of distraction outside a vehicle and something you need to look at when you are trying to find a business or street.

If you do see something that attracts your attention, acknowledge it, then look back at the road otherwise you could be one of the 9% of distraction crashes.

Singing or dancing to music

8% of accidents are attributed to singing or just grooving along to the music. Remember to keep your eyes open as you hit the high notes.

It’s fairly easy to spot people on the motorway shaving or putting on makeup, but that doesn’t mean it should be done. In-car grooming, which includes filing nails, brushing hair and plucking eyebrows, was responsible for 6% of distraction-based crashes.

Reaching for an object

Trying to get something from the glovebox while moving is difficult. As soon as you lean towards the glovebox you will tend to steer in that direction which puts you dangerously close to either the verge, cyclists, vehicles parked on the side of the road, or vehicles in the lane next to you. 6% of distraction-based crashes are because people were reaching for something. The best plan is to pull over and get what you need.